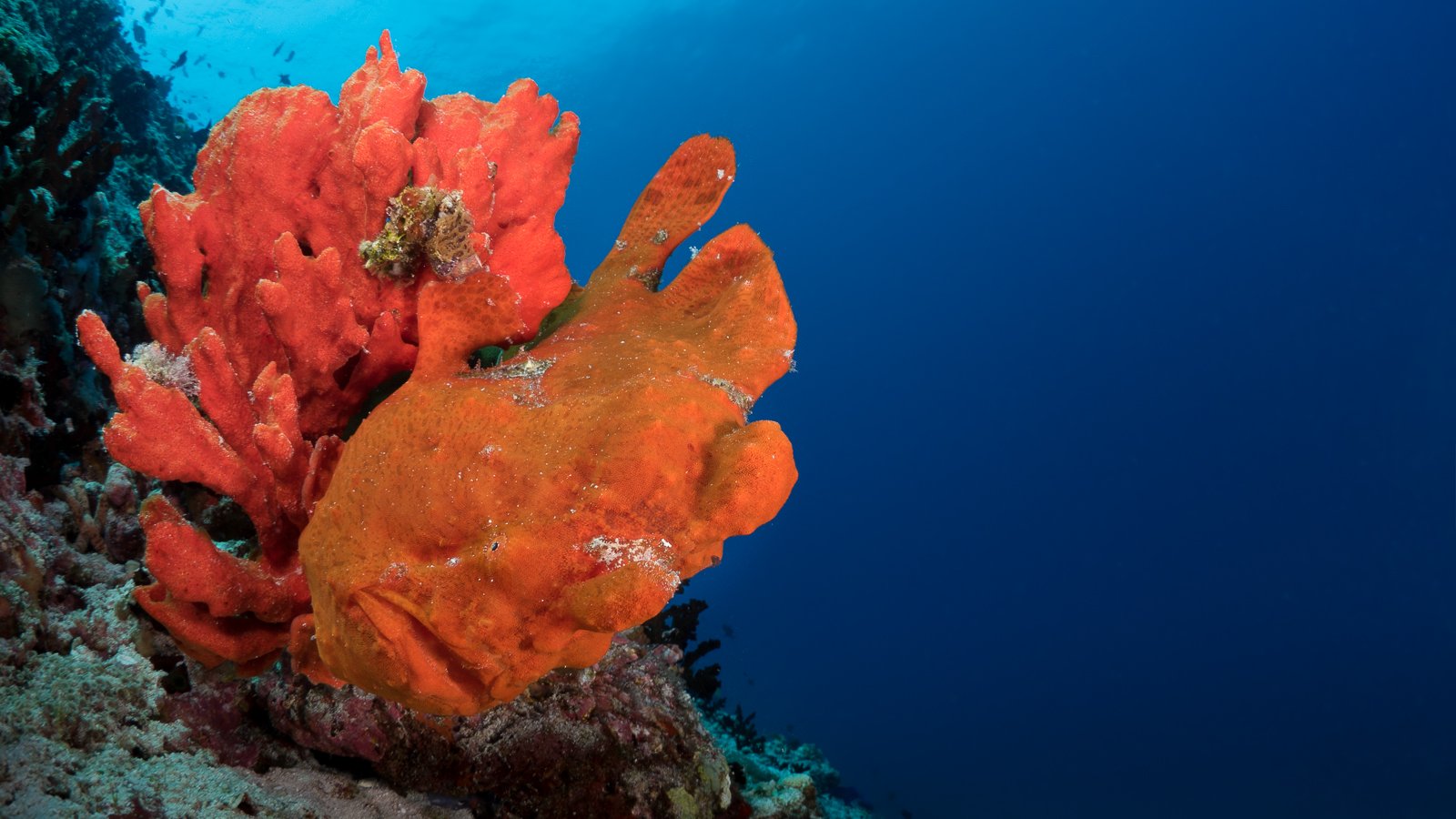 Our favourite dive site in February was Undudhoo Caves. This site is 55 min away from Kihaa, and February with its flat seas, offers just the right conditions for a beautiful boat ride. Undudhoo is part of a perfectly lined up chain of islands, making it one of the most photographed places in the Maldives. Down below, the caves are covered in orange soft corals and teeming with life.

In March, our pick was Aidhoo Caves. Very close to Kihaa, around 10 min boat ride, this site is suitable to all levels, from beginners to advanced divers. It has always enchanted our divers, with its caves full of beautiful blue soft corals and big schools of blue striped snappers and fusiliers. In the beginning of March, our diving instructor Joerg was the first to spot an orange giant frogfish sitting on a sponge. From that moment on, as you can imagine, it instantly became our favourite dive site in March. Everybody else wanted to see the fascinating fish.

And if the frogfish alone was not reason enough, there was also a juvenile eagle ray hanging around there. It was a good contrast, the elegant eagle ray gliding by and the strange looking, motionless frogfish sitting on a sponge.

– They are usually very well camouflaged, but unlike the octopus that can change its color very quickly, it can take them several weeks to transform;

– Frogfishes move very slow, gulping water in their mouths and forcing it out through its gills;

– They are ambush predators, having a kind of built-in fishing rod and lure (Illicium and esca) dangling in front of its head. And despite moving so slowly, when it comes to food, they strike really fast. Different species of frogfish have different lures, according to their diet. The lure always resembles the prey’s diet, makes sense, right?

– There are around 46 known different species in the world. Ranging from tiny ones, the size of a thumb nail to 55 cm!

– They can stretch their mouths 12 times its original size and eat a prey twice their size.

We had the opportunity to observe this incredibly interesting creature for almost two months, but we haven’t seen it lately. Maybe it has moved away, or perhaps has just changed its camouflage and we haven’t found it yet. We will keep looking for it, care to join us?