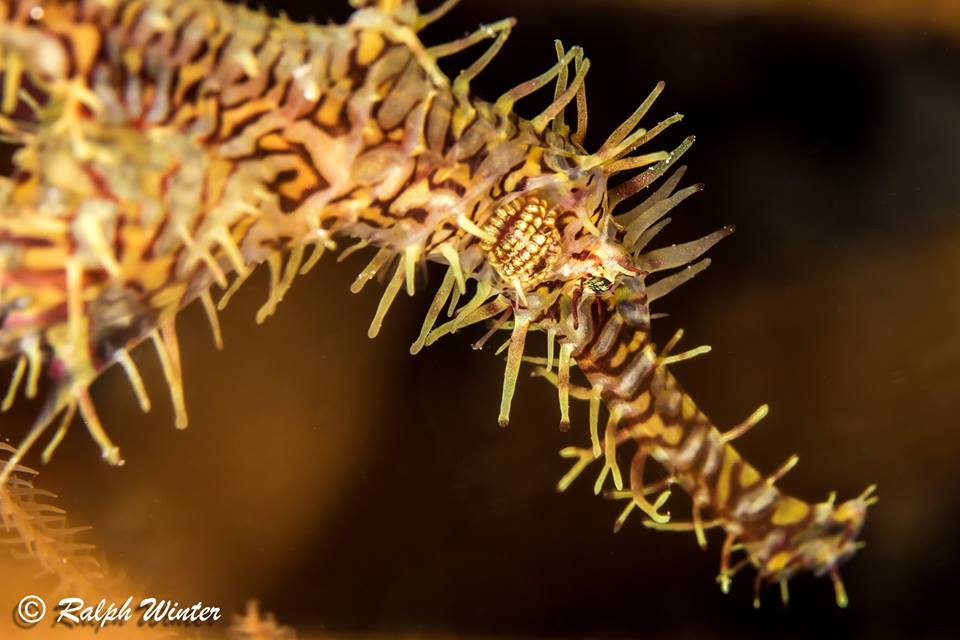 While out on an easy beginner dive, Alex one of our instructors spotted a pair of ornate ghost pipefish along the Kihaa house reef!

This is very exciting news for us as they are quite a rare find but often stay in the same place for a while. As soon as Marc found out he prepared his camera and jumped in to get some photos!

What is a ghost pipefish?

There are currently six different types of ghost pipefish. Those most often found in the Maldives are the Ornate, Halimeda and Robust ghost pipefish. A unique feature of these fish is their ability to mimic or camouflage to their surroundings. They have the ability to blend into their surroundings so well that they are extremely hard to spot! (learn how to spot them here)

The ghost pipefish are in the same order as the pipefish and seahorse. However, they belong to a different family that is entirely their own. Unlike the pipefish and seahorse whose males look after and hold the eggs, the female will hold onto the eggs in a brood pouch. Found under the body the females’ larger pelvic fins fuse to make this pouch. We often spot them in pairs. The larger of the two is the female with the male being smaller. They range in size from 10-15 cm.

These fish spend a lot of their juvenile life floating around in the ocean currents, usually settling on a reef once fully grown. Ghost pipefish like sheltered spots (out of the current).

Where you find them usually depends on the species. The Ornate is often found around feather stars, soft corals, or gorgonians. Halimeda, known also as the coralline ghost pipefish are found within Halimeda algae. This alga often grows along a sandy substrate often lining caves and sloping reefs. The Robust mimics seagrass and is often found along the edge of the grass beds or floating along with loose blades.

If you want to spot one, you will need a good eye and a lot of patience. But trust us when we say it’s worth it!