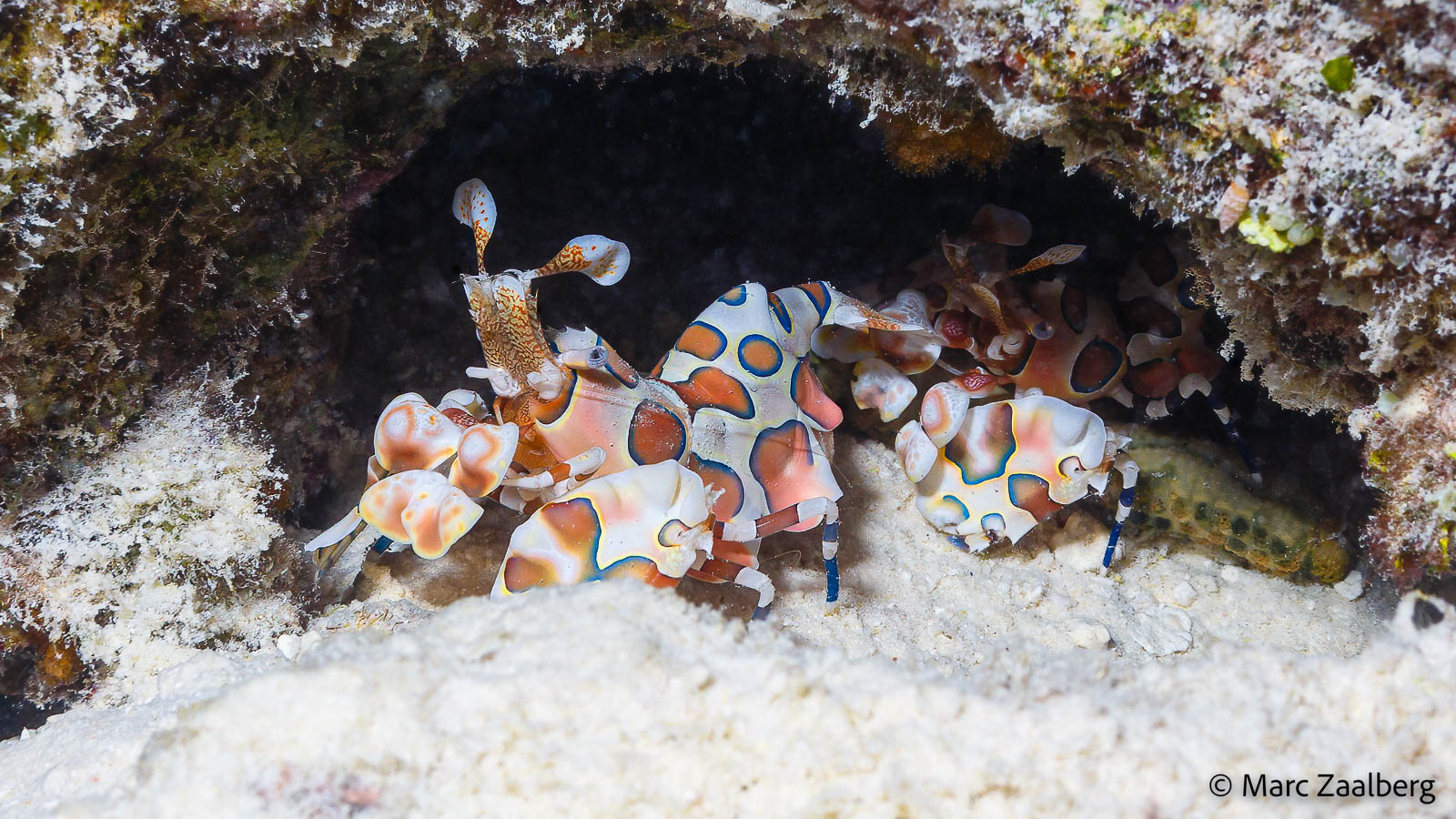 Harlequin shrimp and snapping shrimp for one are very hard to take photos of but we are lucky to have snapped one or two for you. Here is what else you should now about them.

They are definitely one of the most beautiful marine invertebrates in the world – just look at them. The male and female are often seen in pair. They work together to not only reproduce but also to forage.

Harlequin shrimp mainly eat starfish including the crown of thorn starfish. In times of desperation they will revert to sea urchins. They are very skilled in turning a starfish on it’s back to disable it. The shrimp will start eating from the end of the arm towards the central disk of the starfish. To get away, the starfish sometimes will shed the arm the shrimp has attacked. The starfish has the ability to regrow the arm.

Snapping shrimp have different size claws. The larger claw is able to produce a loud snapping sound. The shrimp uses its claws for hunting as well as for communication.

The snap of its claw releases a sound that can reach 218 decibels – lounder than a gunshot. Sometimes groups can number over 300 members and interfere with sonar and underwater communication. The snapping shrimp competes with much larger animals like the sperm whale and the beluga whale for the title of the loudest animal in the sea.

All shrimp in the colony are the offspring of a single female, the queen, and possibly a single male. The offspring are divided into workers who care for the young and predominantly male soldiers who protect the colony with their huge claws.

Another common shrimp in this group is the pistol shrimp. It can grow to 3 – 5cm in length. It does not have pincers. Instead they have a pistol-like feature made of two parts. A joint allows the ‘hammer’ part to move backward. When released it snaps into the other part of the claw, emitting an enormously powerful wave of bubbles capable of stunning larger fish and breaking small glass jars. When the snapping claw is lost, the missing limb will regenerate into a smaller claw and the original smaller claw will grow into a new snapping claw. This reversal is probably unique in nature.

Some pistol shrimp share burros with goby fish in a mutualistic symbiotic relationship – meaning both species benefit from the relationship. The pistol shrimp builds and tends the burrow while the goby provides protection by watching out for danger. When both are out of the burrow, the shrimp maintains contact with the goby using its antennae. The goby having better vision, alerts the shrimp of danger using a characteristic tail movement and then both retreat into the safety of the shared burrow.

Have you ever seen a harlequin shrimp or a snapping shrimp? Dharavandhoo Thila is one of the dive sites we regularly find the pistol shrimp. You have to approach them very carefully or they retreat in into their burrow or you need to be very patient to wait for them to come back out again. 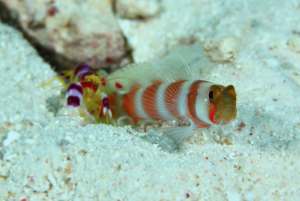