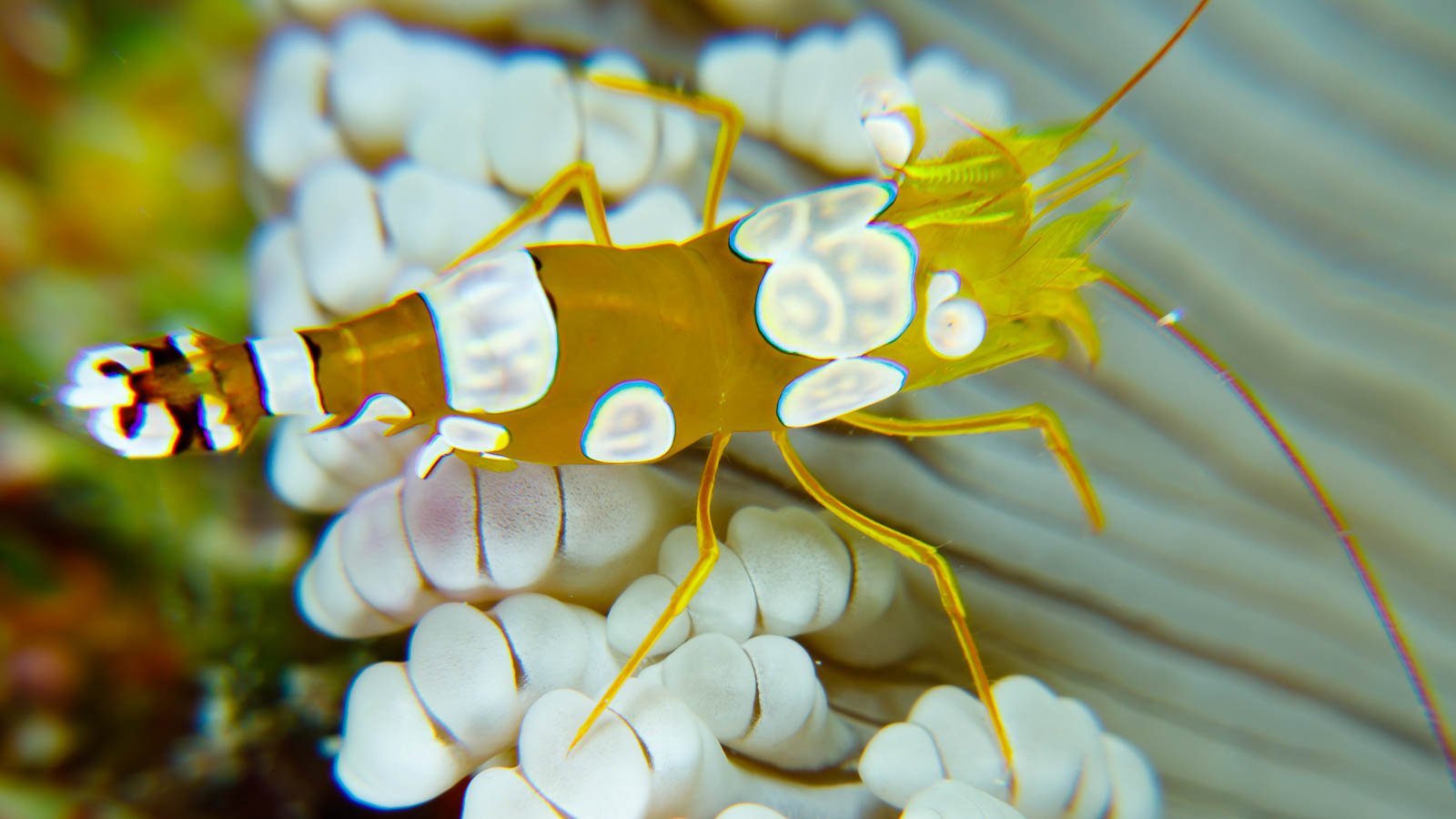 Mantis shrimp and squat shrimp are the first two shrimp we would like to introduce to you in more detail.

They are carnivores that grow to up to 10cm in length while a few can reach 38cm. There are fish stabbing, grasping and smasher versions of mantis shrimp. The smasher feeds on snails and hermit crabs by breaking open their shells with its claws. And any fish that comes too close to a stabbing mantis shrimp gets impaled in a three millisecond strike.

Mantis shrimp have the strongest punch of any creature in the animal kingdom! They even have been known to take on octopus and win. The force of a mantis shrimp punch can go up to 1260 joules which means that they can break a level 1 bulletproof glass in 2 punches.

Mantis shrimp can move their limbs as fast as a speeding bullet and their strength is enough to break glass and boil water. A mantis punch arrives with the acceleration of a .22-caliber bullet. This is 50 times faster than a human eye can blink.

Underwater the low pressure bubble left in the wake of the punch, collapses upon itself in a burst of light and heat, reaching an estimated 4704 degrees Celsius.

The mantis shrimp’s visual system is unique in the animal kingdom! Humans can process three channels of colour which are red, green and blue. Mantis shrimp perceive the world through 12 and 16 channels of colour. On top of that they detect UV and polarised light, which humans can’t see with the naked eye. They can rotate their eyes independently which gives them a 360 degree view of the reef around them in 3D.

Mantis shrimp lay their eggs as a mass. The female carries the eggs on her chest until hatching takes place. After the hatching the larvae enter the plankton stage, drifting in mid water until settling to the bottom sometime later as juveniles.

The squat shrimp is also know as the sexy shrimp. It lives on corals, in up to 7 different types of anemones and other marine invertebrates, animals without a backbone. The shrimp is orange with symmetrically placed white patches edged with thin blue lines. It holds its abdomen and tail in an almost upright position and flicks it up and down. The squat shrimp only grows to a length of 13mm.

There are usually 5 – 8 shrimp on an anemone. They often sit next to it. When they feel threatened they rush back onto or underneath the anemone. At night the shrimp wander a bit further away from the anemone.

Squat shrimp are ‘protandric hermaphrodites’ and start off as males with the larger specimens turning into females.

Hermaphrodite – an organism with both male and female genitalia.

Protandric – having male sexual organs while young, and female later in life.

If you wonder how to find these little critters read our blog on How to spot Marine Creatures.

Did you enjoy reading about mantis shrimp and squat shrimp? We do have another article lined up for you, where we will talk about some more shrimp facts that might interest you.