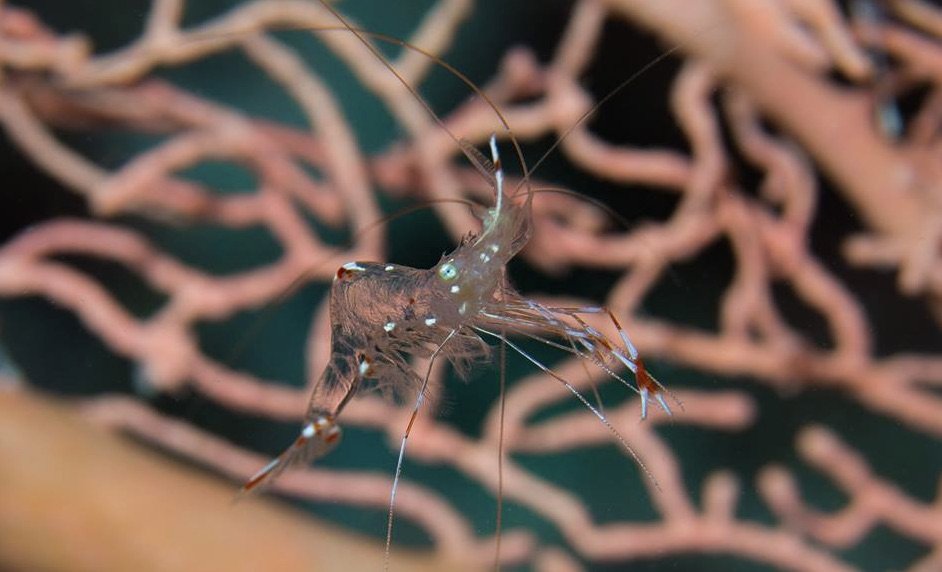 About 1000 species of shrimp live in the tropical seas.

To name just a few here we go:

They can be herbivores, plantivores, carnivores or detritus feeders, meaning they are scavengers living of dead organisms.

Some shrimp act in vital roles as cleaners. They set up cleaning stations in caves or they work from their symbiotic home in a sea anemone. They help other fish to get rid of external parasites, fungi, bacteria and dead tissue found on their skin.

Some are as bold as to clean out food bits stuck in the mouth of a fish. Entering the mouth of a potential predator may seem suicidal but shrimp are so good at their job that fish will line up to have their mouths cleaned by the dentists of the reef.

On each and every dive we can show you different types of shrimp. We can spot them during our day time dives but also during our night dives.

The herbivorous shrimp are smaller than a fingernail but they certainly gobble up substantial amounts of algae. Keeping the plants in check, makes for clearer waters, which in turn gives seagrass beds better access to light and oxygen.

Shrimp have many predators. Some of their natural predators include crabs, sea urchins, starfish, seabirds, whales, sharks, seahorses, dolphins and of course shrimp are also consumed by humans.

In our upcoming blog articles we introduce you personally to a few of the 1000 species of shrimp that you are most likely to see while diving in the Maldives.

let you in on secrets and mysteries of Mantis Shrimp and Harlequin Shrimp and more.