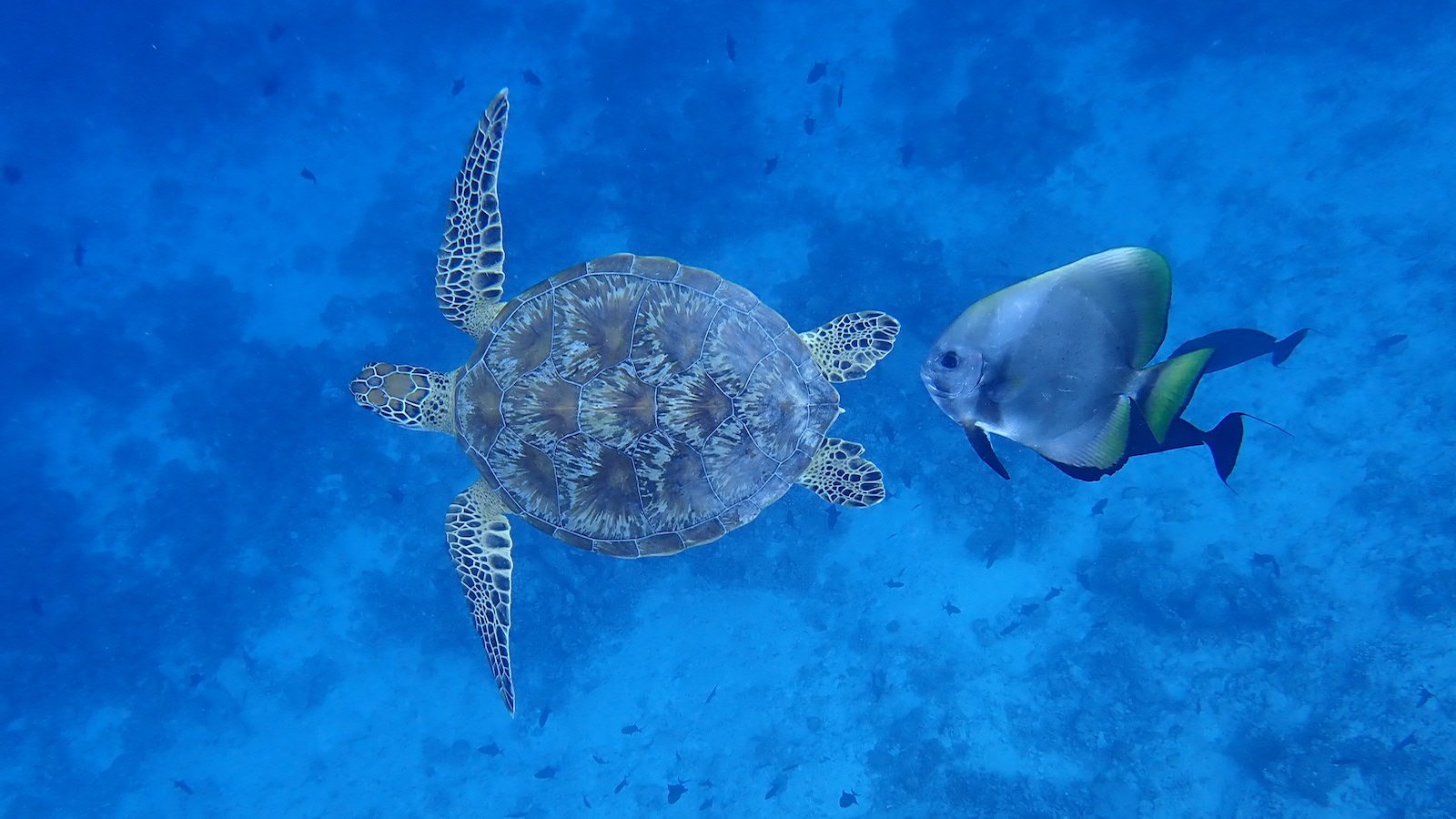 Here we are, back with some more interesting underwater symbiotic relationships. It looks like it is an endless topic, in a good way.

This is an odd pair that I never paid much attention to, but it caught my eye when I was going through some underwater turtle pictures. Suddenly I realize that there was a batfish in many of those photos! And I got myself thinking…WHY??? I’ve asked all my fellow colleagues, but it seemed that this odd relationship also went unnoticed by everyone else.
And so, I resorted to Google. I didn’t find much there either, but it seems that the batfish swims closely behind the turtle, so it can eat its poo as soon as it is released! GROSS, I know!
Apparently, they have similar diets, so the batfish is just making his digestion process easier by eating pre-digested food. Still, yucky!

Warning: It might be too intense for young children!

This is an example of parasitism symbiotic relationship, where only one organism benefits from the relationship, while harming the other one. The reason it can be too intense for young children is because it involves NEMO! Yes, that cute little fish, also known as Anemonefish and Clownfish, that we all came to love through the movie Finding Nemo.

If you have a close look at our nemo picture you will notice a pair of eyes in its mouth, it’s the cymothoa exigua. It might look small and innocent but don’t let it fool you, it’s a tongue-eating parasite. It attaches itself to the tongue of its victim, sucking away the blood. Eventually the tongue will fall off and the parasite will replace its function. It is the only known parasite in the world to actually replace the function of another organ! Creepy, right?

Here are some fun facts about the clownfish, just to lighten up the mood:
– There are 29 species of clownfish, so don’t be surprise if you find one that doesn’t look like the Nemo you saw in the movie;
– They are hermaphrodites, meaning they will change sex during their life. They are all born males but when the female of the group dies, the dominant male will replace it;
– Clownfishes are immune to the anemone’s venom thanks to the layer of mucus on their skin;
– They belong to the damselfish family;
– The female lays around 1000 eggs but it is the male’s job to guard them.

Love the clownfish? You can read more about it here.

Would you like to know more about underwater symbiotic relationships? You can write to us on Facebook with some suggestions.

Our latest news
Maafin Thila – a dive site on the edge.
Latest News
Follow us on Social Media
FacebookTwitterInstagramGoogle+Rss